05 Feb PharmaConex – Where it all Began

Posted at 11:39h in News by Marketing

PharmaConex, Where it all Began

As PharmaConex enters its eleventh year in business, Nicola Ryan, Operations Director and Ashling Quinlan, Client Services Director tells us of where it all began.

In 2007, Paolo Iacovelli, MPSI and Founder of PharmaConex identified a niche for a specialised recruitment agency while working in community pharmacy.

Paolo began introducing his concept to the industry, bringing about PharmaConex’s official launch in 2010. PharmaConex established its first office in Dublin, City Centre followed closely by its second office in Shannon, County Clare. A similar niche was identified in the UK and PharmaConex’s sister company PharmFinder’s was established.

“The People’s agency, we pride ourselves on delivering a personalised service to both Pharmacy Professionals and Clients alike, always abiding by our tag line – We have you Covered. All members of our team are NRF certified and described as ‘approachable, responsive and committed’.”

Ashling Quinlan, Client Services director has been a dedicated member of the PharmaConex team since (what year?). Ashling ensures that PharmaConex builds and maintains relationships with all clients including pharmacy chain groups and independent pharmacies nationwide. Ashling states –

“We are devoted to developing and maintaining the strong relationships which we have built within the industry ensuring our team can offer PharmaConex Locums and Permanent Applicants the widest range of opportunities with in pharmacy”.

Like all other Irish businesses, PharmaConex are currently dealing with the effects of a global pandemic. Nicola speaks of the sacrifices that has been made by Pharmacy professionals –

“Throughout the past 10 months we have seen the resilience of the industry, the commitment and bravery of pharmacy professionals and the lengths our clients have gone to keep their doors open. Our priority is currently focused on ensuring the safety of Locum pharmacists, permanent staff and patients alike.” 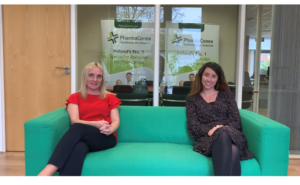